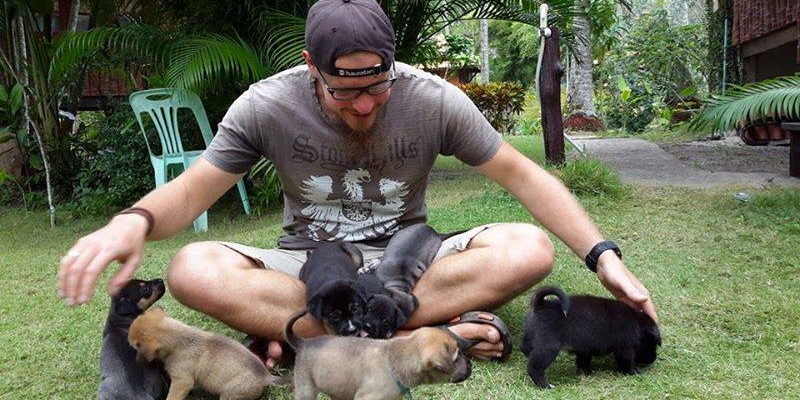 Couple of Travelers Settle in Thailand to Help Stray Dogs

Seeing stray animals is one of the most emotionally charged parts of traveling. Have you ever felt bad enough to give water, food or bring a puppy to a vet? Mantas Pralgauskas and Rasa Skridailaitė have been doing that for four years now.

The married Lithuanian couple fell in love with the Koh Kood island while traveling around Thailand. They now call it home and dedicate most of their time to stray dogs, pursuing a dream of launching the very first animal shelter on the island.

“Word sabai in the Thai language means happy; we want Koh Kood dogs to be happy and healthy,” explains Mantas.

The idea to settle in Thailand and help animals was influenced by a loss of the couple’s pet left in Europe. While traveling, their 10-year-old boxer Aibo got sick and passed away.

After that, Mantas and Rasa started looking for opportunities to live on Koh Kood permanently, which eventually lead to launching a small business of wedding planning.

Being animal lovers, the couple was heartbroken to witness an uncontrolled dog population on the streets. There was not a single vet, let alone a vet clinic, on the island. Approximately 1200 dogs lived there, more than half of which were stray, suffering from severe diseases caused by malnutrition and the absence of vaccines.

So, in 2015, Rasa started sending letters to the local vet schools, clinics and animal organizations asking for help. With the support of Khon Kaen University, the couple initiated the first-ever dog spay-neuter project on the island, getting 70 dogs done. Later on, more organizations helped, resulting in 700 dogs spayed or neutered in two weeks.

Today, Mantas and Rasa live with their thirteen dogs while continuing to combat the suffering of strays by raising funding and awareness.

“Local people know us and what we do. They come asking for help when dogs, cats, even pigs get sick,” tells Mantas. “If we can’t help, we ask the owners to go to the mainland, or if they don’t have time or money, we transport their pets ourselves and pay with our own or donated money. It also costs time – at least three days to go there and back. But we never take money for medication or the help we provide.”

The family often have visitors from all around the world, coming to meet the dogs and support the dream of dog paradise.

These Things Show How Easy and Stylish Minimalist Travel Can Be

Make Long Flights a Blast with These High-Tech Headphones!

7 Great Books to Take on Your Hike

Travel Hack: Your Feet Will Thank You for These Shoes

Stylish Bags that Travel: You Can Now Conquer the World in Style

The Shades that will Prevent Squinting and Complete Your Stylish Look

For Ladies Only: Secret Ideas for Cool Travel Accessories