Top 10 Street Foods to Try Around The World

There is something truly magical about waiting patiently whilst a street chef prepares a freshly cooked snack from seasonal ingredients that the locals simply can’t live without!

The flavours, the sounds and smells all combine to create a wonderful dining experience that can leave you wanting more or wishing you had gone for the ‘safe option’. In today's world ‘street food’ can be found everywhere - not just on the street, within shopping centres, malls and amusement parks and festivals.

Here are 10 of the best street foods and where to try them.

This is the arguably the most popular street food in South and Central India, visitors to the country will regularly see queues of all ages waiting patiently for their lunch or after dinner fix next to one of the many street carts. Pani Puri is comprised of a baked Puri which a hole is then poked into and filled with a potato or veg filling, tamarind and a diluted, spiced water then added and eaten instantly.

Usually one portion will consist of 6 to 8 puris delivered to customers as they wait, one at a time, another usual tradition is that the last puri be a slightly different ‘sev puri’ which is very similar but more sweet with sev crisps sprinkled on top to cleanse the palate. The taste and experience of eating these snacks is both tasty and fun but one thing to ensure as a tourist is that the water being used is filtered or mineral. There are many places across Mumbai, Delhi and India making them this way, just be sure to ask first and with 6/8 servings for around $1 this street food is one to try even if you end up not finishing them.

Cherburekai, sometimes spelt Chiburekki is a deep-fried dough ball, flattened and then folded over a filling of either ground or minced meat and onions. The dish originates from the Central Asian territories but has found popularity across the Baltic regions, Turkey, Romania and Russia. It has proved a very popular street food snack due to its quick cooking and preparation time and deliciously filling taste.

One portion will usually consist of 1 or 2 servings which is more than enough to fill any hunger hole, high in carbohydrates and a fairly heavy filling make these street snacks perfect for people needing an energy boost or just wanting something homely and filling. At a cost of around $2 per serving this makes a great value street snack.

The first time one encounters this street food it would be easy to walk on by and not even recognise what is on offer. The street food markets of Bangkok are truly legendary and the food and snacks on offer will defy all logic in some cases and make some visitors feel queasy. Fried insects and bugs, snakes and peculiar meat dishes can be overwhelming but the salt crusted fish is one safe bet.

Smothered in fresh rock salt, these river fish are then skewered (including the head and tail) and simply barbequed on an open street fire. Once cooked they are cut through the center and a mixture of chilli sauce, fresh chillies, onion and bell peppers can be added at one's own discretion. The taste is out of this world as you bite through the crusty salt flakes and into the soft, tender fish. At a cost of around $4 per fish this is a great lunch or dinner snack. 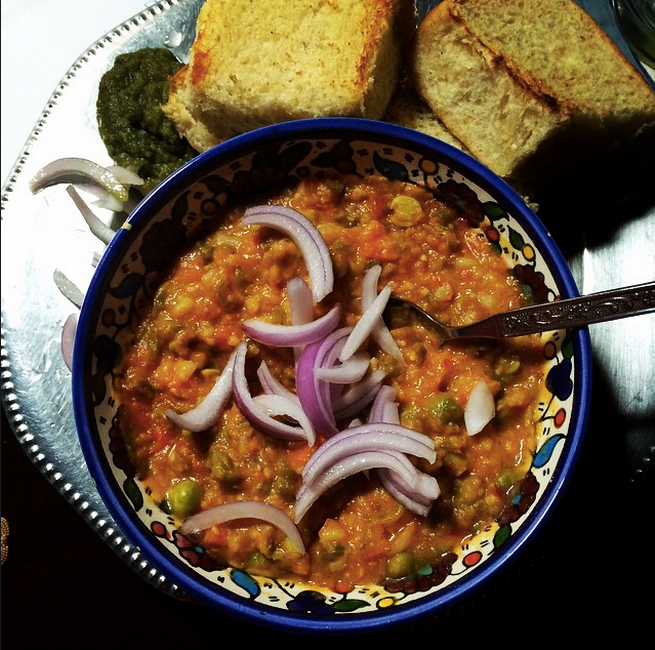 Another entry form arguably the home of street food - India. Pav Bhaji is an extremely popular dish with youngsters and school kids. Toasted sweet breads are served with a vegetarian gravy consisting of salted butter or ghee, fresh chillies, onions, tomato and a blend of mild spices with fresh raw onion on the side to be added to the gravy for extra crunch.

As with most street foods in India they are eaten using hands, simply using the sweet bread to tear and dip in the gravy with a sprinkle of fresh onion is the best way with almost 100% of places offering a free top up on sweet breads you can get stuck right in and expect a waiter to be topping you up soon. A plate of Pav will cost about $1 inc your refills and is one of the most filling, delicious street food snacks available in India.

Vietnam is well known for its traditional drip coffee and obviously this is widely available, but one street delicacy not so well known is Egg Coffee. That's right you read it correctly, eggs in coffee. While not strictly a food, egg coffee is said to be more like a desert than a drink. Egg yolks are whisked into condensed milk and added to espresso to create a thick, almost desert style coffee which is both delicious and very smooth.

Locals swear by its ability to perk them up and prepare them for a long day and whilst the idea of eggs and coffee combined might sound foul, the taste is surely worth experiencing even if you do end up washing it down with another espresso! At under $1 a cup it’s a great way to kickstart your day of adventure. Eggspresso, anyone?

It tastes as good as it looks! This speciality dish of Korean street food vendors is popular around the world and has been recreated in many countries with a different twist but none are quite as tasty as the original KFC - Korean Fried Chicken. Tender chicken is first coated in flour or breadcrumbs, fried and then added to a rich gravy made from red pepper paste, gochujang, soy sauce, rice vinegar and brown sugar added to give it that hit of sweetness.

The sweet and sticky sauce, combined with the coated fried chicken combines to deliver one of the most flavour packed and delicious street foods available in Vietnam for under $3 but visitors could be forgiven for not knowing where to start with the huge variety of street food available on every corner.

Momo’s are a type of dumpling served steamed or fried and are popular across the Indian subcontinent and the Himalayan region of wider South Asia. While similar to the Chinese baozi and Korean mandu, momos have a very distinctive indian influence containing spices such as turmeric and jeera and prove an extremely popular street food option. Street vendors will usually specialise in either veg or non veg momos with chicken of buffalo meat used and also have a fried or steamed preference of cooking whilst restaurants and cafes will usually sell all varieties.

Fried momos give a wonderful aroma and crunch, and when combined with a chilli or sweet dipping sauce will bring a smile to any foodies face whilst the steamed option is more subtle and easier on the palate but also packs a lot of taste. On the street you can find a serving of 6 momos for under $1 but in a restaurant expect to pay more.

Eating insects in Thailand is a challenge most visitors will face during a night out, particularly in places like Bangkok’s Khao San Road and Phuket’s Bangla Road. However, edible bugs are also a popular choice for locals, being a light and surprisingly healthy snack packed with protein. Visitors will find grasshoppers, red ants, silkworms, crickets and more, usually deep fried and once you brave it past the idea of putting an insect near your mouth we can almost promise you'll be headed back for seconds!

You can find most insects available to eat at the night markets in Bangkok and a few established stalls around the island of Phuket, but mostly you will be approached by vendors, especially near nightlife hotspots touting their creepy crawlies to tourists and locals alike. Vendors understand the hestiance of tourists but are also very keen for you to try their produce, a plate of varied insects will cost you around $2 and give you an experience you will never forget.

Escargot is a food mostly thought to be reserved for the upper echelons of society accompanied with a glass of wine or champagne. But in France they are also considered a quick and tasty street food loved by locals and tourists. The snails are typically purged, killed, removed from their shells, and cooked accompanied by garlic butter, chicken stock or wine, then placed back into the shells with the butter and sauce for serving.

A serving of escargot will cost between $5 and $10 and usually be served with a choice of sauce or dressing. Additional ingredients may be added, such as garlic, thyme, parsley and pine nuts and they are usually served in plates of six or 12 snails.

You would be forgiven for thinking that french fries are something that most people have tried already, but have you tried french fries in Belgium? Contrary to popular belief, Belgium and not the USA of France actually pioneered the french fry, as Belgian journalist Jo Gérard claims that a 1781 a family manuscript recounts that potatoes were deep-fried prior to 1680 in the Meuse valley.

Despite ongoing tension over the true heritage of the french fry it is undisputed that on the streets of Belgium you can find a truly tasty, fried potato and choose from a vast amount of dips and extras, such as salt and rosemary or good old fashioned garlic mayonnaise. A punnet of french fries will set you back around $3 on the streets of Belgium and we recommend grabbing a nice cold drink, sitting back in one of the numerous cafes and bars that allow you to eat outside food and watch the world go by.

10 Best Festivals around the World You Never Heard of